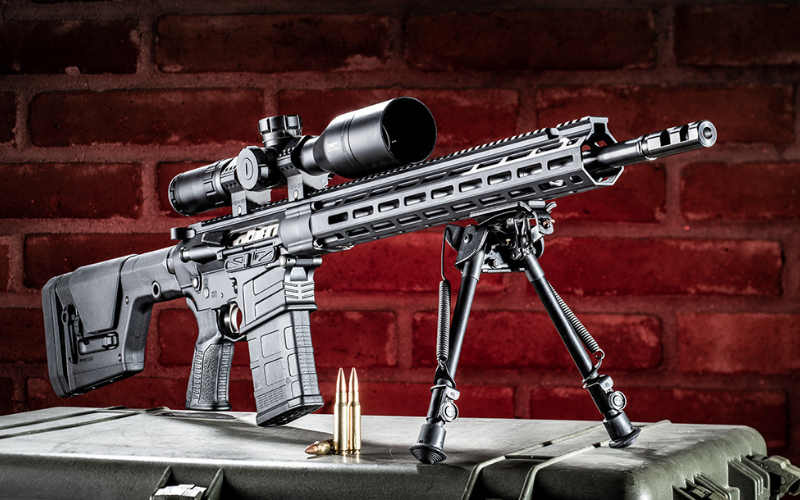 When talking about iconic American Rifles, many people talk about the M14, M1 Garand, or the modern AR15 and its Military versions. However, an incredible American rifle, that doesn’t get as much recognition, is the AR-10.

It is essentially the older brother of the AR-15 and its predecessor. The AR-10 was the first rifle designed by Eugene Stoner to use the revolutionary direct impingement system. It was originally chambered in 7.62 x51mm and is still in wide use in the US, and to some extent in the Military as well.

The History of the AR-10 started in the late 1950s, all over the world, militaries were modernizing their small arms around the time, the Soviets had their AK-47s, and the west had the FN-Fal, also called the right arm of the free world and the H&K G3.

So, in the US, the military was also looking to modernize, and adopt the popular 7.62x51mm caliber, instead of the 30.06 used in the M1 Garand. Instead of going for the Fal or the G3, they opted to go with American Made rifles and started military trials.

Around this time, Eugene Stoner, the designer of the AR-10, was working for a company named Armalite, which was a subsidiary of the Fairchild Aircraft company. He designed the AR-10 for military use, however, his submission to the US Army trials was a little hasty.

The AR-10 went against the Springfield T44 and FN-Fal, and as it was a late entrant, all the caveats of the rifle weren’t refined. Though it was lighter and easier to shoot than any other battle rifle of the time, and initially got favorable responses it could not win the Military contract.

Instead, the Springfield T44 was selected by the Army, and designated as the M14. However, the story of the AR-10 does not end there. Armalite continued to look for international contracts for the AR-10. Learning from the failures in the military trials, they refined the AR-10 design, mainly to include a full steel barrel instead of the aluminum-steel composite barrel that burst on one of the military testing rifles.

The rights for the manufacturing of the AR-10 were sold to a Dutch manufacturing company named Artillerie Inrichtingen for 5 years. During this time, the AR-10 was refined and many changes were made. It was also exported to multiple countries, and its refinement has been divided into three patterns by firearm experts. There are the Sudanese pattern AR-10s, Transitional Pattern AR-10s, and the Portuguese Pattern AR-10s.

The Sudanese pattern gets its name because the Sudan military ordered 2500 AR-10a at the time and specific changes were made for their needs. The Portuguese pattern rifles were sold to Portugal, and some other countries in small numbers and the transition pattern rifles came between the two designs.

The AR-10 wasn’t used or developed frequently after that, since Armalite sold its design to Colt, and the company slowly went out of business. It was bought by a company from the Philippines and later bought by a former Army Ordnance officer Mark Westrom, owner of Eagle Arms, in the late 90s. The Armalite AR-10B was then produced as a modernized version of the original AR-10, with many refinements that were made in the AR-15.

Around that time, the Knight’s Armament Company also developed the SR-25, which was based on the AR-10 design. This rifle was also used by the US military, and designated as the M110 Semi-Automatic Sniper System. It is still in service with US army Snipers, and by some other countries as well.
These days, modern versions of the AR-10 are also popular among civilians, why use them for self-defense, hunting, and sport shooting as well.