Home What Caliber Is An AR-10? 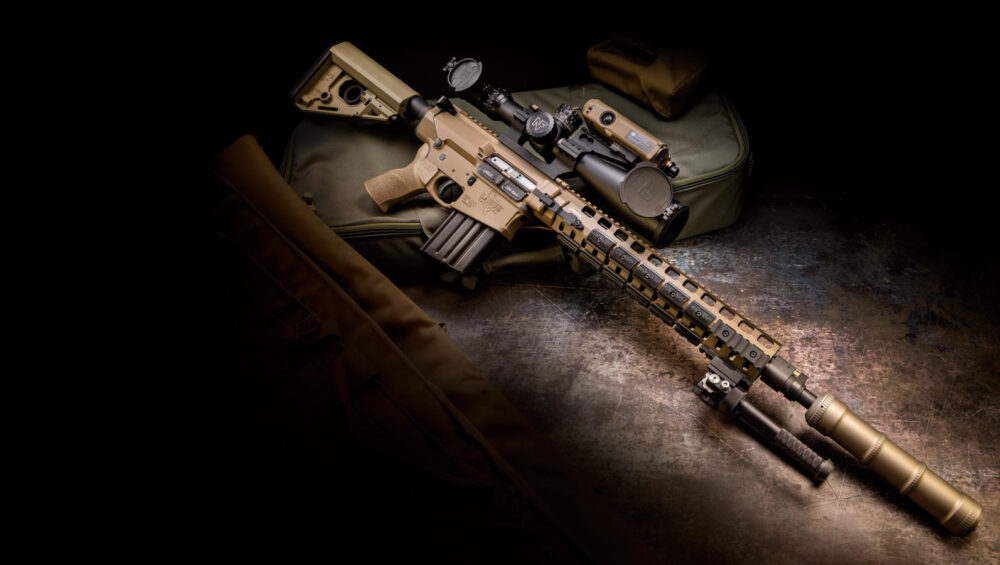 Though the AR-15 is one of the most common rifles in the US and its military version, the M4 is in service with the US military, there is a lot less recognition given to the predecessor of the AR15, which is the AR-10.

After the second world war, the nature of conflicts was slowly starting to change. Modern militaries were looking for battle rifles that were more effective and fired smaller cartridges than the large calibers of WW2-era rifles.

Around this time, the 7.62×51 caliber was gaining a lot of popularity in the west. Many countries adopted the FN-Fal and H&K G3, however, the Americans relied on the M14, which was a modernized version of the M1 Garand, and in many ways, a step behind the other military battle rifles in the world.
Around this time, Eugine Stoner, the designer of the AR-10 and AR-15, was working at the Armalite factory, and he designed the AR-10, which was originally chambered in the most popular battle rifle caliber of the time in the west, which is 7.62 x51. The AR-10 was also scaled down to be chambered in .223 Remington, or 5.56×45, and was designated as the AR-15.

However, the Role of the AR-10 does not end there, because of their lightweight, and long-range capable caliber, AR-10s were perfect for the role of a DMR (Designated Marksman’s Rifle), and the US Army and Air Force used them with the M110 sass (Semi-Automatic Sniper System).

Capabilities of the 7.62x51mm Caliberd

The 7.62x51mm Caliber is a very capable round used in a variety of rifles. It has a projectile with a diameter of 7.62 mm and the length of the casing is 51 mm.

Also known as 7.62 x51 NATO, and .308 Winchester in the civilian market, the original caliber of the AR-10 rifle is very capable at a wide array of ranges. The effective range of the caliber is about 600 meters, however, with its high energy, it can be leather way beyond that, even though the bullet starts to drop. In fact, the longest confirmed kill using the 7.62 x51 NATO caliber was recorded at about 1,250 meters, when U.S. Army Staff Sergeant James Gilliland took out an insurgent sniper in Iraq using an M24 sniper rifle chambered in 7.62×51 NATO.

These days, the caliber, and the AR-10 rifles are quite popular among hunters, military, and law enforcement alike. Though the AR-15 is a more versatile option, especially in close to medium ranges, if you want a little bit more stopping power and muzzle velocity, the 7.62 caliber is perfect. It is one of the best options out there in the Designated Marksman Rifle role.7.62

Other calibers used in the AR-10

Though the original AR-10 and most of them used by civilians and the military is chambered in 7.62×51 mm, over the years, people have chambered these rifles in other calibers as well. One of the common calibers used in some modern AR-10s is 6.5 Creedmoor. Its dimensions are close to the original 7.62×51 mm caliber. The same bolt can be used to fire both calibers and they can also be formed using the 7.62x51mm/.308 Winchester casings. 7mm-08 Remington, .338 Federal, and .358 Winchester are also used in some AR-10s.

So, to sum it all up, the AR-10 is a very capable rifle, and is for all intents and purposes, the predecessor, and scaled up version of the very popular and widely used AR-15 style rifles. It was originally chambered in 7.62x51mm, and for the most part, modern AR-10s also use the same cartridge, which is very capable and has a rich history of military use, all over the world. However, some people have also used other similar rounds in the AR-10 style rifles.