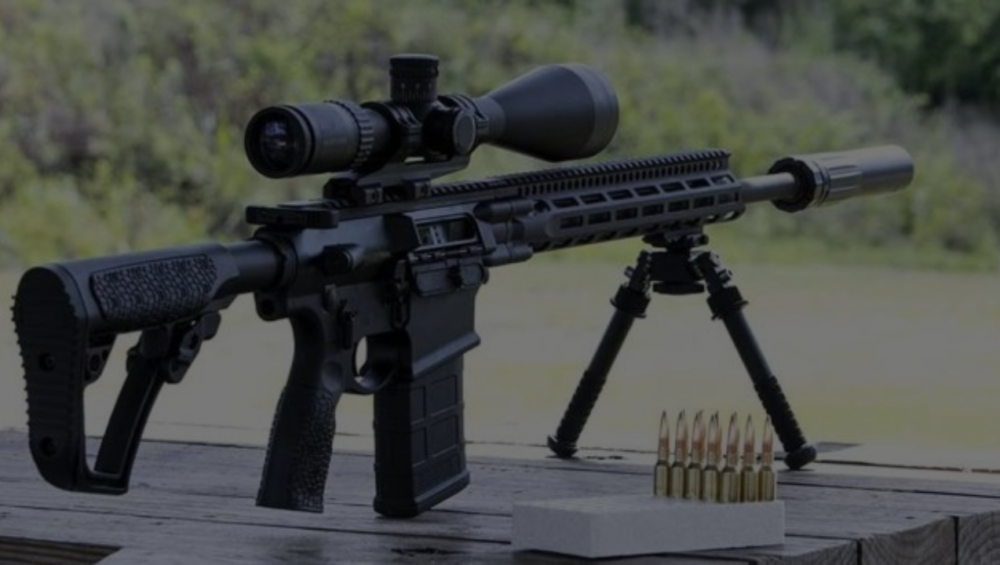 So you are thinking about building an AR style rifle, but are not too crazy about the standard cartridge of the AR-15: the 5.56NATO/.223 Rem. Instead, something with a little more power and range is in your sights. The AR platform lends itself as well to both accuracy and performance as it does to modularity. Able to have different furniture and parts, it is capable of accepting a variety of cartridges like the .308 winchester. The model of AR style that fits these larger, more powerful cartridges is called the AR-10, or .308 rifle. It involves a bigger frame and  bolt, but still utilizes the same trigger components, grip style, and stock style.

The AR-10 comes from the original designs for the AR platform under Eugene Stoner. The main NATO cartridge which arose after World War II and the Korean War became the 7.62×51 NATO. This  cartridge was modeled exclusively after the .308 Winchester, a common American hunting cartridge that was suitable for use in war. Some of Stoner’s first ideas for the AR platform would incorporate the 7.62×51 NATO, which would have successfully made his model firearm suitable for other military contracts with other NATO affiliated countries.

During Colt’s possession of Armalites patents, not much of the AR-10 was seen apart from various designs used for law enforcement agencies across the US. The hobby of building them did not reach popularity until the designs for the AR platform became available to the public. The development of the AR-10 platform in the civilian market skyrocketed, opening up the door for different specifications to make it more suitable for civilian use. Whether for hunting, performance shooting, or self defense, the AR-10 is a great and affordable choice for any and all shooters.

What calibers are available for the AR-10?

Since the AR-10 has a solid place in the aftermarket, there are also different chamberings for the model. This is pretty typical for the AR platform  as the AR-15 and AR-9s both have modified barrels for different calibers as well. Think of it like this: The AR-10 has a much bigger build, because it is made to take calibers longer than the .223/5.56.

The AR-15 could never chamber the .308 because, lengthwise, the cartridge is too long for the system. The AR-10 solves this issue with a lengthened bolt system that is also capable of housing calibers of larger length measurements. So while the .308 is a perfect fit for the AR-10, it will not be able to hold calibers longer than it like the .30-06, another popular hunting cartridge.

6.5 Creedmoor is essentially a .308 if it were 1mm smaller in diameter with just a tad more gunpowder in its casing. The 6.5 Creedmoor is a relatively new cartridge, becoming famous alongside the AR-10 in the late 2010s. It has a slightly higher ballistic capacity than the .308 Winchester, so it is able to squeeze out a higher muzzle velocity with around 200 yards more range.

The 6.5 Grendel has the same diameter as the Creedmoor, but is much like the .300 AAC blackout if the .300 blackout was a magnum cartridge. This short and stubby round has a much longer projectile length, increasing its mass to produce a higher force of impact at the reduction of some speed and range.

The AR-10 does require a little bit more confidence when firing, which is not necessarily a bad thing compared to the AR-15. The AR-10 shoots ammunition that is usually too expensive to shoot around all the time, thus making it even better for hunting purposes. The increased range, speed, and force of impact of the AR-10 also helps in this situation.

What parts are needed to build an AR-10?

The AR-10, like the others in the AR family, are made of two main components that each house core parts of the AR-10s function. The AR-10 is a simply built rifle, so many of these parts can be placed in and fastened with pins. Here are all the parts needed to build an AR-10

The AR-10 upper contains the necessary parts in order to cycle the action. It utilizes a gas system which uses a small portion of the expanding gasses to push the bolt back, creating the semi-automatic function of the gun. Here are the main parts of the AR-10 upper:

AR-10 BCG: The Bcg for an AR-10 is much like the AR-15, except the diameter is much bigger. The carrier is als much bulkier as it needs more weight in order to reduce the recoil of the ammunition its shooting. The AR-10 made the nickel boron finish famous in the aftermarket and is the most sought-after bolt finish for the AR-10.

The AR-10 Barrel: The barrel of the AR-10 is based on the free float system, meaning that its only point of contact with the rest of the gun is at its chamber. It is locked tight with a barrel nut that must be securely fastened to a certain torque measurement. The only other thing connected to the barrel is the gas block.

The AR-10 Gas Block: The gas block is the part of the AR-10 that connects the gas tube to the barrel. On the barrel is a small cavity where the gas block must be connected to. Adjustable gas blocks can be purchased for calibers designed for use with suppressors.

The AR-10 Gas tube:   The gas tube is a thin bored tube that carries the expanding gas of the fired cartridge to the gas key which is fastened to the AR-10 bolt carrier group. The expanding gasses push the bolt back to eject the cartridge.

Muzzle Devices: There are a series of muzzle devices that are great for the AR-10. Because it is a hunting rifle, the most useful muzzle device would be either a flash hider or a suppressor. However, compensators and muzzle brakes are also viable options for this full length rifle.

AR-10 Handguard: Since the AR-10 is based off of a free float system, its handguard never comes into contact with the barrel itself. There are AR-10 keymod rail mount hanguards, as well as the newer M LOK handguard. Both have their advantages. The keymod rail system is much more user friendly, while the M LOK system is much better at securing attachments for longer periods of time.

The AR 10 Lower houses all of the lower components. It provides the grip, as well as the connection to the buffer system which holds the adjustable buttstock. This portion of the AR-10 is responsible for the firing of the gun. The upper works hand in hand with these functions in order to create the semiautomatic system the gun is known for.

The AR-10 Lower:  The AR-10 lower is the housing component for all of the lower parts. It is responsible for connecting these parts to the parts of the upper so that the system can work in its entirety. The are different lowers, like AR-10 80% lowers and polymer lowers that from which the gun can be built from scratch.

AR-10 Grip: The AR-10 grip is the exact same grip as the AR-15. The standard grip resembles the mil spec grip for the AR platform, but can be modified and upgraded for a fairly cheap price. The most popular AR-10 grip is the Magpul MOE, which has stippling great for an ergonomic grip.

The AR-10 Buffer System:   The buffer’s chief responsibility is to provide the necessary spring force to push the bolt back into the battery after a round has been fired. It does this with the help of a weighted implement called a buffer that works together with a spring that also reduces the amount of recoil. There are buffers with different weights that change the effectiveness of this process.

The AR-10 Buttstock:  The buttstock of an AR-10 is much like the AR-15 and in many cases, they are also interchangeable. The buttstock is connected to the buffer tube, which houses the buffer and buffer spring.

Necessary tools to build a .308 Lower

While tools are necessary, ones specifically catered to the building of AR style firearms are not. In fact, the whole build can be assembled with common household tools. The most necessary tool for the building of a .308 lower is a roll pin punch set, as most of the components are fastened via roll pins. This will make disassembly a lot more convenient as well.

For the sake of convenience, looking into an armorer’s wrench may be a good idea. Armorer’s wrenches are multi-functional tools designed for many of the components of an AR platform firearm. They came traditionally with a castle nut wrench, a barrel nut wrench and a few other components that will make the assembly/reassembly process a lot easier.

For now, jig kits will still be necessary to machine 80 lowers. And if you still plan on buying an incomplete receiver, then buying the proper jig kit will be crucial to an accurately built rifle.

The hobby of gun building in the civilian market will be taking a drastic turn come August 24th as it is the effective date of the ATF Final Ruling 2021r-05f which effectively bans the use of 80% lowers by civilians.  This does not mean that building a .308 rifle will be impossible, it just means that buying an 80% will only be legal if the lower itself and the associated upper are serialized by an ATF authorized marker.

Fortunately, the process of building a .308 rifle will remain relatively the same minus the clear infringement of the second amendment. The process will be closer to building a rifle from a completed lower, which means  that milling the lower out is no longer necessary. Instead the fire control group will simply need to be installed if it hasn’t come preassembled. The rest of the components have always been easily interchangeable, so most of the process will remain the same.

Building a .308 rifle is as easy as building an AR-15, because they are essentially the same build. The AR-15 is simply a smaller version of the AR-10. It utilizes the .308 winchester/7.62×51 NATO cartridge. The barrel can be modified for the addition of different calibers as well.

Building an AR-10 keeps you in control of the quality of every part whereas a purchased build could have parts of varying qualities. It simply reduces the chance for error that faulty parts might get you by putting the acquisition of parts in your hands instead of in someone else’s. This also may have a hand in making the overall build much cheaper in the long run.

The AR-10 is a great rifle. It can be used for hunting, competition shooting and self defense, however, not in the home. It brings the AR platform to the full length rifle atmosphere and does not disappoint because of the AR platform’s already great attributes. It is easily modifiable, accurate, and lightweight compared to other full length rifles. Buying an AR-10 is as easy as setting up a reasonable budget for materials and accessories, and then checking out.