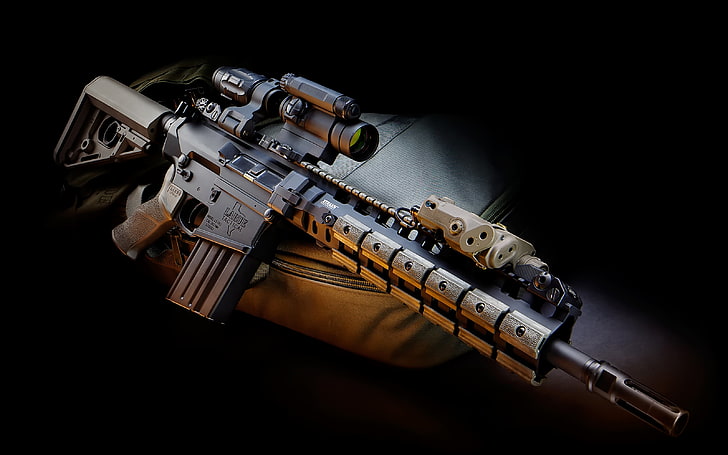 The US has a very rich history in firearms manufacturing, and some of the most innovative firearm designers are from America. One of these weapon designers, who has undoubtedly had a massive impact on the small arms of the world, is Eugene Stoner, the designer of both the AR-10 and AR-15 rifles.
Both these rifles and their variants have seen widespread use in the US and all over the world, by civilians, law enforcement, and Militaries. Both rifles are very similar in design, with the main difference between them being the caliber.

It all started in 1956 when the US military opened a competition for the adoption of a new rifle to replace the M14. Around that time, Many nations in the world, especially in the west, started using the 7.62 x51 caliber, some in the FN-Fal and others in rifles like the H&K G3. Eugine Stoner also designed a rifle in the caliber to submit for the Military trials. At that time, he was working for Armalite and developed a rifle they named the AR-10.

The AR-10 was better than the competition in many ways, however, it was still rejected in favor of the Springfield Armory T44 design, which got the military designation of the M14. Since the M14 was similar in mechanism and operation to the M1 Garand, the Army believed that it would be a better replacement, and be easier to integrate into the Army.

The drawbacks of the M14 were exposed during the Vietnam Conflict when it was put against the AK-47s used by the Vietnamese. The M14 was difficult to control in full auto, and the soldiers couldn’t carry enough ammo to keep up with the sustained fire of the AK-47s.

So, the US military was now looking for a smaller caliber rifle that could be as effective as the AK-47s. Eugine stoner designed a scaled-down version of the AR-10, chambered in the new 5.56×45 caliber. The rifle was called the AR-15 and submitted to the Army for testing, however, the Army rejected it. Around this time, the parent company of Armalite named the Fairchild Aircraft company was in serious financial strain, and it decided to sell off the right of the AR-15 rifle pattern to Colt.

The Fairchild president Richard Boutelle and Air Force Vice Chief of Staff General Curtis LeMay were good friends, and at a party, they started talking about the AR-15. They decided to shoot some watermelons with the rifles, and General LeMay really liked it. The rifle was tested and LeMay placed an initial order of 8,500 AR-15s for the Air Force, a year later, after rigorous testing, the Air Force ordered an additional 80,000 AR-15s to be issued to airmen.

So, the Secretary of Defense at the time, Robert McNamara ordered another detailed testing of the AR-15. After a lot of testing, and some changes to the platform, it was finally adopted by the military and named the M16.

As mentioned before, in terms of design and ergonomics, the AR-15 and AR-10 are very similar rifles, with the main difference being the Caliber. Chambered in the smaller 5.56 caliber, the AR-15 is a more general-purpose rifle that can work in a variety of roles, whereas the AR-10, with its larger 7.62×51 caliber rounds, fits a more specific role, that is of the DMR. AR-10s are in service with the military and are also quite popular among civilians and hunters.

Because of the larger caliber, the AR-10 also has a heavier barrel, and a larger bolt and receiver. Therefore, it is also heavier than a standard AR-15.

Both the AR-15 and AR-10 are two of the most innovative firearms of modern times, and the fact that the AR design is still in service with the US military, and is used all over the world, is a testament to the effectiveness of the rifle.